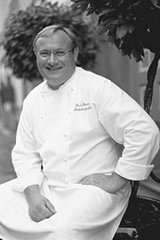 Born on June 18th 1963
1* Michelin
He is the first Norwegian chef to have won the Bocuse d’Or! Already renowned in his own country, where, at the age of 23 he became head chef of the Continental Hotel, this success has increased his reputation on the culinary scene. He appears in the culinary column of the newspaper Dagbladet and participates in many television programmes in different countries, etc. However, it is in his restaurant, the Statholdergaarden, opened in 1994, that he has really developed his art. There, he warmly welcomes gourmets from Norway and elsewhere in a sumptuous 17th century property in the heart of Oslo. His gastronomic cuisine, based on Nordic traditions with a strong French influence, gives pride of place to Norwegian products, including several cheeses capable of surprising even the most well-travelled French palates! For those also looking for the roots of simple, high quality Nordic cuisine, Bent Stiansen has a Danish inn at the same address.