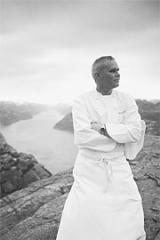 Born on May 5th 1971
He is definitely the “sportiest” of the Norwegian chefs competing for the Bocuse d’Or. Reading his professional itinerary gives the impression of an inexhaustible practitioner of cuisine, and of culinary competitions in particular. Trained at the Godalen Hotel School and the famous Culinary Institute of Norway at Stavanger, he began his career by working at a string of prestigious restaurants in Sweden, the USA and Denmark, before returning to Norway, where he worked at the inevitable Bagatelle, among other places. However, he is a born competitor and has participated in the national culinary team since 1997, becoming its captain from 2001 to 2004. He has been acclaimed at many international competitions, in both individual and team events. After directing the Culinary Institute of Norway, Charles Tjessem, is now happy to practice the cuisine he likes within Statoil, an oil company, which has entrusted the catering of its reception facilities to him. There, he offers dishes to the Group’s corporate management and guests that find their inspiration in mainly Norwegian raw materials, including its renowned fish and red fruits.