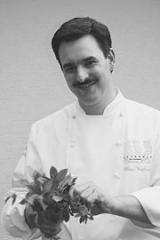 Born on November 18th 1973
Reading the Curriculum Vitae of this 31 year old chef gives the impression of a man who, after being born in a family of restaurateurs, has never doubted his vocation, alternating training and challenges with the sole goal of becoming ever better. Between stays in reputed cuisines, such as those of the Haeberlin family, Harald Wohlfart and Helmut Thiltge and Dieter Müller, he trained at the Cordon Bleu school of Paris, won the International Contest for Young Commis Rôtisseurs in 1996, won the Taittinger prize at Hambourg in 1997, became the first German to win the European Gastronomy Challenge of Bordeaux, and so forth. Finally, he returned to his parents’ restaurant, the Talblick inn at Wildberg in October 2001, but has not slept on his laurels, joining the German Bocuse d’Or team in January 2002 to climb the podium in 2003! In a region with a strong culinary tradition, he likes to takes things to their limits and admits to the influence of French cuisine, with the addition of hints of the Mediterranean and even touches of Asia.