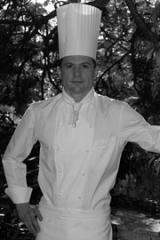 Born on April 16th 1974
Franck Giovannini was the first Swiss to climb the podium of the Bocuse d’Or. Passionate, rigorous and precise, he constantly wants to prove his capacities to everyone. A tireless perfectionist, he gives the best of himself every single day in order to progress yet further. Franck Giovannini’s young but already successful career started at the Auberge de la Couronne where he was apprentice to Claude Joseph. Later, he went on to perfect his art with great names of cuisine such as Grey Kunz in New York, Fredy Girardet, Benoit Violier and others. Since 2000, he has been deputy chef to Philippe Rochat at the restaurant of the Hôtel de Ville de Crissier. The Bocuse d’Or is his first competition, an experience he describes as exceptional and unforgettable. All these encounters have forged a strong ambition and his dream is to open his own restaurant one day. Since he loves the mountains so much, one may imagine the restaurant will be in the midst of nature. But until then, Franck has decided to try a new ascension of the Bocuse d’Or podium by competing once again at Lyon in 2011!