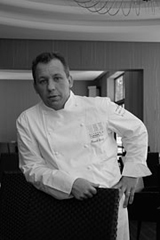 Born on November 7th 1969
1* Michelin
Franck Putelat comes from the Jura and started his career in traditional manner in his region by passing the CAP and BEP diplomas. He showed great determination to rise to the top from the outset. When only 17, he was hired in the kitchens of the Hôtel de France at Les Rousses. Since then, he has never left the firmament, going from the Auberge de Chavannes, Taillevent, under the direction of Philippe Legendre, to Georges Blanc’s restaurant at Vonnas, where he was Executive Chef, and then to the Bastide in St Tropez. This itinerary also allowed him to take part in different promotional activities around the world, from New-York to Singapore, Peru, Canada and elsewhere. He acquired a taste for competition when he entered a contest for Apprentice Chefs in 1986. In 2003, after 12 participations in culinary competitions, he won the Bocuse d’argent which raised him to the highest levels and allowed him to continue his discovery of other culinary cultures by travelling. In 1998, he became the Chef of the Hôtel de la Cité in Carcassonne. In 2005, with his wife Céline, he realized his dream by opening the Parc Franck Putelat in Carcassonne. Their keywords are rigor and excellence applied to cuisine, decoration and service. But, for all his rigor, Franck makes a point of keeping passion at the forefront of his cuisine.