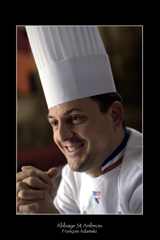 Born on March 25th 1971
1* Michelin
François Adamski comes from the north of France and he loves his region. He learned his trade at the hotel school at Le Touquet before conquering Paris, where he did his military service at the Hôtel Matignon as chef to the Prime Minister. He then went to the Plazza Athénée, the Ritz, Maison Prunier, the Intercontinental, etc. After several years’ loyal service as Chef of the Abbaye St Ambroix at Bourges, he took a new direction in 2009 when he accepted the management of the magnificent « Le Gabriel ». His faithful brigade followed him and, to listen to them, « it’s a real pleasure ». Thanks to Le Gabriel’s three restaurants he can give free rein to his imagination, creating a cuisine where he aims at excellence in the image of the place, whilst remaining simple and authentic with genuine savors at the same time. A cuisine in which ‘taste’ remains the keyword. When he won the Bocuse d’Or in 2001, he had already brilliantly demonstrated his talents at different national and international competitions, though memories of winning the most prestigious of them still give him a thrill of pleasure.