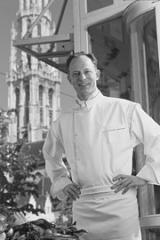 Born on January 18th 1953
Gert Jan Raven is Dutch. After a difficult start to his career in his own country (and a stint in the army, where he was catering manager), he continued working in Belgium in grand hotels such as the Hilton and Royal Windsor in Brussels.
This experience opened the doors to becoming head chef of the Hilton Hotel in Antwerp, where he worked from 1994 to 2009. He still finds the time to participate brilliantly in different competitions, including the Prix Prosper Montagné, which raised him to the rank of Best Chef of Belgium in 1983. The title and trophy were awarded to him by Princess Paola. He then realized his dream of opening his own restaurant, the Restaurant Raven, in his town of adoption. His goal is to provide good food for a good price! However, his participation in the 1991 Bocuse d’Or remains the great moment in his life, although he had to prepare for it alone under difficult conditions. Advice from friends with sure palates and an iron will helped him to take third place on the podium. A genuine surprise and, as he says, “the proof that one can win despite having few resources!”