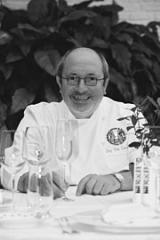 Born on May 8th1950
Guy Van Cauteren is undoubtedly one of the best-known Belgian chefs. He came to cuisine via butchery after having been expelled from college for his subversive reading material (especially that of Louis-Paul Boon the “anarchist” writer), but he is now a happy and fulfilled chef. After attending the hotel school at Ostende, a passage at Paris at Lucas Carton, and holding the post of head chef at the French Embassy at Brussels, he installed himself in the imposing family home in east Flanders, a respectable inn called the “Lion d’Or” known since Napoleonic times. His restaurant, “‘t Laurierblad” (the laurel leaf) is reputed for its cuisine, which is “solid, fair and free from any attempt at risky improvisations”. However, far from remaining in his cocoon, he cooks on TV shows and also acts in the service of his profession, presiding the Eurotoques Flandres from 1995 to 2005 and the Master Chefs of Belgium from 2000 to 2003.