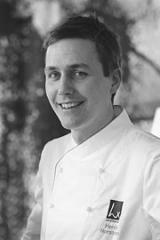 Born on April 22nd 1969
1* Michelin
He initially received traditional training at a hotel college before going on to work for some of the best restaurants in his country, where he perfected his technique. He felt it to be great honor to be chosen to represent Sweden at the 2001 Bocuse d’Or and he put his heart and soul towards winning the Bocuse d’argent, which he says “shone as warmly in my eyes as the Bocuse d’Or, as I was so happy to participate in this competition!” He particularly remembers the period leading up to it and pays homage to the father of the Swedish “Bocuse d’Or”, Sven-Gunnar Svensson, who helped to train candidates by offering them an educational tour of the best tables in other European countries. Henrik’s knowledge of the best French kitchens inspired him to achieve what he did at the competition. He also considers that winning the Bocuse d’argent was a major factor of his success and what he is today. In his daily work in the kitchens of the newly opened LUX, his restaurant in Stockholm, he above all likes to create a harmonious atmosphere and considers that his dishes are good when he works in unison with his colleagues, and if he is a good enough teacher to pass on the very essence of his cuisine. He seeks to offer Swedish savours with twists of different European influences. Henrik’s restaurant is a “family business” run by himself, his wife, and his best friend Peter Johansson, also aided by his wife. In 2005 he opened a pastry kitchen, Lux Dessert och Chocklad, in partnership with one of the best confectioners in Sweden. It has now become the official supplier to the Royal Court of Sweden. In 2009 he started the B.A.R. concept whereby the customer chooses the basic products that will compose their dish (mostly fish) and their method of preparation.