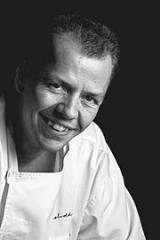 Born on July 21st 1969
When Odd Ivar Solvod climbed the podium in 1997 to receive the Bocuse de bronze, it was far from being his first victory in a culinary competition. Since 1988, he has put in a string of award winning performances; the Silver Medal at the World Young Chef Championships, and the Best Chef of Norway competition, which he has won three times. An active member of the Norwegian culinary team, he is often presented by his peers as the “king of competitions” and enjoys helping others to prepare their own performances. His mind is wide open to other culinary cultures and he fights to win respect for and improve the quality of products. However, his most satisfying victory is undoubtedly that of having won the confidence and professional esteem of Edgar Ludl, a kind of godfather to Norwegian chefs who created a renowned gastronomic restaurant at his village at the edge of Sandefjord to which flock all the gourmets of Norway and beyond. After being his right-hand man since 1988, Odd Ivar built his own restaurant in 2002 in the Art Deco style at the centre of the historic park of Sandefjord. He still finds time to realise a few dreams, such as writing three works devoted to Babette’s Feast. In November 2006 he presented a culinary work on DVD and, surprise, he sold his restaurant and decided to dedicate himself to his profession in a different way as a consultant.