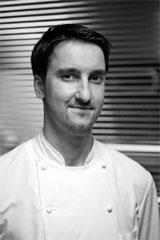 Born on March 17th 1974
His first gastronomic emotion remains the pot-au-feu that his grandmother made every Sunday. « I’ll always remember those smells that bewitched me when I entered the kitchen ». After training at the hotel school of Le Mans when he was 15 years old, Philippe started at the Aubergade at Pontchartrain. Meeting Jean Bordier there was a decisive step in his career. He learned all the basics of « Escoffier » cuisine. Then, he learned the importance of rigour under Louis Grondard at the Drouant restaurant, after which Frédéric Anton of the Pré Catelan passed on his finesse to him while Michel Roth at the Ritz gave him the taste for competitions. Lastly, Yannick Alléno, with whom he has worked for over ten years, helped him to mark out his culinary itinerary and refine his knowledge. Philippe Mille describes his cuisine as « classical but adapted to the tastes of today ». Aware of the importance of keeping an even keel, Philippe draws from sources other than cuisine, as he swims and likes to travel, with a marked preference for Asia. He is now learning Japanese. He took a personnel and professional change of direction in January 2010, leaving the capital for Champagne, where he has taken control of the kitchens of Les Crayères.