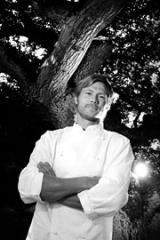 Born on August 22nd 1974
Rasmus Kofoed is from Denmark, where he has picked up the national traits of exigency and friendly casualness. These traits have helped him to excel professionally in famed restaurants; the Scholteshof in Belgium, the Kommandanten in Copenhagen to name but two. He is the captain of the Danish culinary team and devotes time to competing for it. Chef of the Year in 2003, he participates in competition after competition: he was winner of the Nordic Championship in Stockholm in 2004, then winner of the Eurotoques 2004 prize… which opened the door to the Bocuse d’Or where he reached the third step of the podium. After having won the 1st prize of the Nordic Trophy for the Best Fish 2005, and the Cordon Bleu in 2006, he again won the Eurotoques prize and the Desserts championship in 2006. When not cooking or playing football he likes art, travelling and eating in the best restaurants. A dramatic turn of events occurred in 2007 when he participated in the Bocuse d’Or and rose to the second step of the podium! On returning to Copenhagen, he opened the Geranium, an organic gastronomic restaurant (he is still a convinced practitioner of this style of cuisine). After winning a star in no time, he was obliged to close for reasons beyond his control. However, his fighting spirit is leading him to open the Geranium² in July 2010. He promises that the second Geranium will be bigger, more beautiful and stronger than the first. And, always hungry for challenge, he is going to compete for the Bocuse d’Or 2011, aiming to pick up the gold, what finally happened. In 2016 Geranium was the first restaurant ever in Danemark with 3 Michelin stars.