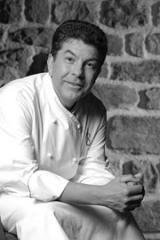 Born on June 14th 1956
3* Michelin
He is known everywhere as the chef of the mountains, and presides over the family inn transformed into a temple of gastronomic excellence. From his village of St Bonnet-le-Froid, his reputation won with the Bocuse d’Or and above all with the quality of his cuisine, attracts both local and international gourmets. They all come in search of savors that change simple foods such as mushrooms and lentils from Le Puy into an unforgettable gastronomic experience and find a warm family welcome to which his wife Michele makes a big contribution. With the opening in 2005 of the new Restaurant Régis et Jacques Marcon, he realized his dream of building a decidedly modern establishment at the top of a hill overlooking the natural surroundings that have always fascinated and inspired him. Diners can stay at the hotel that was awarded an Ecolabel in 2009 for its design and environmentally friendly mode of functioning. The restaurant also gave his son, Jacques, the opportunity to convert the passion handed down by his father into a trade above all chosen for the sake of pleasure. They form a tandem that works well and gives Régis Marcon the time to devote himself to missions he holds dear, such as the one entrusted to him by the government in 2009 for working with his profession on setting up an apprenticeship development program.