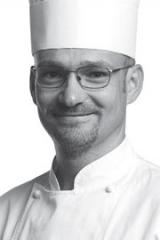 Born on February 3rd 1965
Everyone who frequents the Bocuse d’Or knows Roland Debuyst and his wife Ayse for their joyful and tireless commitment alongside Belgian candidates. To meet them in their own country, you have to go to Nossegem, in the suburbs of Brussels, where he stands at the oven while she greets the customers. After training at Ceria and starting his professional life in places such as the well-known Radisson SAS Brussels, in 1993 Roland Debuyst opened his own restaurant called the Orangeraie, a fragrance from the south in a place where the atmosphere of Provence pervades in homage to a region he loves dearly. Known as a tireless worker, he places great value on textures that he uses to surprise his visitors’ taste buds. He is a keen competitor and winning the first prize of the Prosper Montagné competition was also a big step towards winning the Bocuse d’argent in 1997. A turning point occurred in May 2005 when Roland decided to close his classic gastronomic restaurant, calling on an architect to completely revamp its image and to start Orange Food Fashion, a trendy eatery in which he serves decidedly good modern cuisine. Its success was immediate. He then took over the very fine Brasserie Mariadal in Zaventem which was awarded a Bib gourmand by the Michelin Guide in 2009.