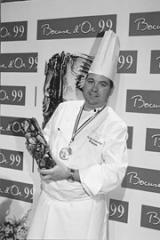 Born on August 29th 1959
1* Michelin
Ferdy Debecker is a typical example of a “born” chef, who, after training at the Louvain hotel school, immediately went to work in reputed star ranked restaurants; first in Brittany at the Château de Locquenolé in Lorient, then at Eddie Van Maele’s in Brussels, among others. In 1987, he opened his own restaurant with his wife Ann where he welcomes all who wish to enjoy good fare and relax. In a small traditional style farmhouse in the woods a few kilometers north of Brussels, he offers a very personal conception of what he considers as “bespoke” cuisine. His open mind takes him to other worlds, and he participated in 1992 in a meeting between Belgian artists and several chefs that gave rise to a very original work. He says that “one always returns to the roots of traditional cuisine, giving it a personal touch and adapting it to modern tastes”.