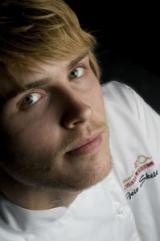 Born on July 2nd 1980
It was when he saw Bent Stiansen on TV, winning the Bocuse d’Or 1993 that Geir decided that his day would also come. In the meantime, he worked, travelled and spent time in France where he worked for Michel Rostang among others: « I consider French cuisine to be the basis of all classical cooking ». Then, with the true spirit of a competitor, he spent 50 hours a week (on top of his daily work) training with one target in sight: winning! He always wants to be the best in everything he does. So when he needs advice, Eyvind Hellstrøm, Harald Osa and other Norwegian Bocuse d’Or winners were on hand to give it to him. He acknowledges the debt he owes to his chef and coach of the time, Odd Ivar Solvold. « He knows about everything there is to know about food and how a kitchen works. He’s a complete professional who has an answer for every question ». Like so many of his compatriots, he likes nature and it certainly influences his cuisine which « must be colourful and appetising ». Geir is a (hyper)-active boy: he skies in winter and sails in summer. And he keeps fit by working out in a gym! After an active sabbatical period which he put to use starting up a wine import company, he is starting out on new culinary adventures and has announced the opening of a fish restaurant in November 2010, in Sandefjord, of course.