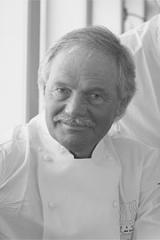 Born on June 24th 1947
Jens Peter Kolbeck is undoubtedly the most international of Danish chefs, as well as being the most famous. His career began with a world tour of the best kitchens. From Hamburg to the Savoy Hotel of London, Rome and Washington (where he worked for the Danish Embassy) and then to New York, he collected a rich panoply of experiences. However, that was not the end of it. From 1970 to 1974 he toured the best tables of France: Haeberlin, Guérard, Vergé, Troisgros, Bocuse, Point, etc. When he returned to Denmark, he had become a remarkable chef thanks to all these influences and Queen Margaret made no mistake when she took him into her service. He stayed 5 years managing the ovens of the Royal household before returning to the world of restaurants in which he enjoys making dishes for all the Danes that flock to his table. He now works as a consultant for hotels and other private businesses. His participation as coach to Jan Vsetecka enabled the Czech Republic to compete in the 2009 Bocuse d’Or.