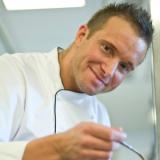 Born on May 3rd 1978
Jonas remembers his first gastronomic sensation perfectly well. « It was in Norrland, in the north of Sweden. I ate blueberries that had just been gathered in the woods, served with homemade vanilla ice-cream ». He loves products from his own country but doesn’t hesitate to work abroad to benefit from contact with other cultures: The French Laundry – Napa Valley, The Square 2** – London and Pierre Gagnaire in Paris. He is amazed to be representing his country at the Bocuse d’Or. « The Bocuse d’Or is the most prestigious prize that a chef can win ». As a good Scandinavian, he is preparing for the Bocuse d’Or in sports-like manner, training for hours at a time with the help of Swedish winners Henrik Norström and Mathias Dahlgren who convey their experience of the competition. Jonas is also a keen sportsman, his second passion. « Physical training gives you real mental strength ». Whenever possible he likes to travel and discover the wines and gastronomy of other countries. After competing, he enjoys travelling, mostly in Asia. The advent of the economic recession just when he wanted to open his restaurant has somewhat dimmed his dream, but only temporarily!