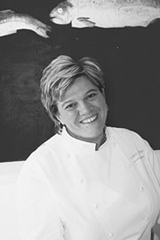 Born on April 27th 1955
1* Michelin
She was born and raised in a world composed of a café-restaurant, a hotel, a service station and a bowling alley! After the baccalaureate, she chose to study law in France, but returned to her village of Frisange after her father’s death to manage the family business. This “duty” turned into a passion so she decided to open the “Lea Linster” gastronomic restaurant and was awarded a star by the Michelin Guide in 1987. A warm and open person, she has met some of the greatest chefs, such as Freddy Girardet, Joël Robuchon, Paul Bocuse, the Troisgros family and many more, enriching her cuisine and her love of the profession. When given the opportunity in 1989 of representing Luxembourg for the Bocuse d’Or, it was an obvious chance for her to gain her reputation. Her simple and delicious cuisine enabled her to become the first woman to win a Bocuse d’Or. The award propelled her into the culinary firmament though she still has one regret, “that there are no longer any female candidates for the Bocuse d’Or!”