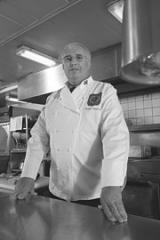 Born on May 23rd 1951
He was the executive chef at the Hyatt Hotel in Brussels when he competed for the first Bocuse d’Or in 1987. He had already been named best chef of Belgium in 1980 and won 1st prize of the Prosper Montagné competition in 1979. His itinerary, which had taken him to some of the best tables of Belgium (the Ecailler du Palais Royal, the Villa Lorraine, the Maison du Cygne, etc.) unquestionably contributed to his culinary expertise, allowing him to rise to the second step of the podium. Starting out at “Chez Marius en Provence”, he then focused on managing the restaurant teams of grand hotels (Ramada, Hyatt, Scandic Crown, etc.). He often carries out missions abroad (London, Dubai, Miami, Stockholm, etc.), especially for operations to promote Belgian cuisine. Since 1997, he has supervised as Head Chef for the official receptions given by the European Commission where he also manages the catering for the President, the Commissioners and their guests.